The Times and Daily Mail focused upon local outrage as the BBC dedicated less than 100 words to the story. But all three overemphasise the Muslim-only angle.

Cemetery Development Services submitted both applications on behalf of two clients. In a statement, their Managing Director, Justin Smith stated:

“There are two different applicants with two different sites in proximity to each other, with each application viewed on its own merits.  Whilst they are predominantly for Muslim burials due to the regional demand, both applications do not exclude other denominations from using them.

The important figure is not the total number of burial plots but the average annual burial number, which in both cases, is between 70 – 150 per annum.

As British citizens, the Muslim community have the same right to burial as any other British resident.”

So it boils down to an issue of demand. Data from the latest census confirms that Solihull’s Muslim population did greatly increase since 2001. Yet, that figure only represents 5,247 residents (2.5 per cent).

Solihull still overwhelmingly identifies as White British, but individuals from minority backgrounds went up by 11,638 (108 per cent). Diversity naturally brings a diversity of faith, as the number of Sikhs and Hindus increased. Neither group (nor Solihull’s shrinking Christian population) are excluded from the cemetery proposals.

ITV did highlight the multi-faith aspect of one cemetery application (but not the other).

The local debate around ‘Muslim cemeteries’ began in January this year, when the first application went to Solihull council.

Hundreds of objections focused upon increased traffic in a village of about 600, encroachment on the greenbelt, and available space in other cemeteries.

For Muslims, the primary burial site in the region was running out of dedicated space. A new plot would simply accommodate an aging Muslim population and reduce travel time for relatives. Cremation is not favoured in Islam, as Muslims believe in physical resurrection on the Day of Judgement (yawm ad-din).

Yet, the public outrage (genuine or manufactured) did not force the withdrawal of the application in March. Mohammed Moosa withdrew on financial grounds.

By July, the application was re-submitted, and local outrage returned, and shows no signs of relenting in September.

Britain First incorrectly claims credit for the original application failing and hints at a fresh campaign, “When they re-surfaced again, activists from the West Midlands blanket leafleted the entire village. Time for Britain First to ramp up the pressure it seems.”

Even in death, Muslims do not escape blind hatred and indignation from individuals who push the conspiracy of Islamisation:

“Just when will they give us Christians a graveyard that big, or don’t we count in this God forsaken country..!!!”

The latter is the top-rated comment on the Daily Mail article as the former attracted over 400 ‘likes’ on Britain First’s Facebook page.

Once again, we see how a minor story easily morphs into another anti-Muslim meme (for those happy to believe the very worst about British Muslims). 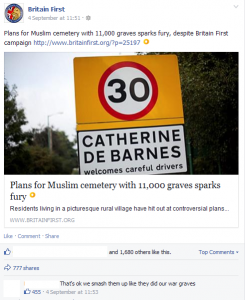 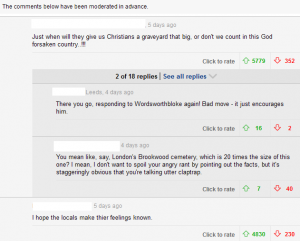 In spite of the misdirection, planners rejected the proposals in November, some in the local Muslim community spoke of an anti-Muslim agenda.