The degree of understanding of Polish identity varies by geographic location. We in Britain, tend to view the nation in kaleidoscopic terms. Hardworking but ‘foreigners stealing jobs’. A fragmented contradiction that hints at positive xenophobia.

Migrants restored Britain after the scars of World War II. The annuals of history detail the worst of colonialism. But some, even in 2014, refuse to acknowledge the benefit of migration.

Notions of this superiority and ‘old glory’ created a British form of racism and xenophobia that ebbs and flows.

A recent example of this flow came after European Union expansion in 2004. The hearts of many in Britain hardened as free movement created extra job competition. Yet, for Poland, EU expansion created new possibilities.

Perception clouds judgement and a facet of Polish identity absent from discussion is religion. Our perception of Poland’s mono-religious identity is somewhat true (the nation is majority Catholic).

Yet, Islam and Judaism flourished in Poland for centuries. Until the Holocaust eradicated 2.9m Polish Jews (90 per cent of the total pre-war figures).

“The first recorded account of Muslims in Poland is the Battle of Grunwald in 1410.” Bronislaw Talkowski told us, between traditional Tatar meals in Kruszyniany, northern Poland.

The Grand Duchy of Lithuania (a union that incorporated Poland until the 16th century) benefited from Tatar migration. Under Duke Witold, Tatar Muslims joined the army. Many gained recognition and increased rank for their heroics during the 16th Century.

In the 1670s, a pay dispute meant the Tatars sided with Mehmed IV’s Ottoman Empire during the Polish-Turkish war (1672-1676). But quick negotiations realigned the Tatars with Poland, and after the war, John III Sobieski granted them land. The August dynasty continued the tradition of donating land to the Tatars in gratitude for their war effort.[1]

Polish Tatar involvement in the Siege of Vienna (1683) will shatter a modern Islamophobic myth. The anti-Muslim blog ‘Gates of Vienna’ markets itself on this myth: “At the siege of Vienna in 1683 Islam seemed poised to overrun Christian Europe. We are in a new phase of a very old war.”

“Religion was irrelevant. It was not about fighting other Muslims but fighting invaders.

The King awarded Tatars the village of Kruszyniany, the right to marry Polish women, and right to build a mosque. All thanks to the Battle of Vienna,” Talkowski insisted.

Thanks to our translators, the history of Polish Taters proved a compelling end to an indulgent and generous meal.

But the Tatar story continued to inspire as we traded empty plates for the nearby Muslim cemetery (mizar). Stories of individual Tatar bravery filled our ears like the cold October wind.

The mizar dates back to the 17th Century, around the time of Tatar settlement in Kruszyniany. [2]Simple stones mark the graves of the departed. Upon some of the older headstones, the Arabic, Polish and Russian inscriptions fade like the sunshine. As we welcome the evening, the surrounding forestry glowed in a haunting orange hue.

Of the many gravestones, one stood out. Ismail Bajraszewski was born towards the end of the 19th Century and died in 1956. Bajraszewski was one of the 34 Polish fighter pilots in 303 Squadron who fought the Nazis during the Battle of Britain. 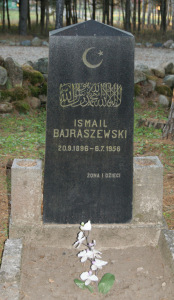 Bajraszewski’s story is a microcosm of the Polish Tatar experience. Tatar assimilation puts religious and national identity on equal, not competing footing.

The Great War decimated the Polish Eastern Frontier. Many Tatars perished, their villages and mosques destroyed. [3]

Post-war Poland saw the Tatar population decrease from 6-7 thousand to under two thousand. Many settled in western parts of Poland, including Gdansk, and villages like Kruszyniany.[5]

Respect for the Tatars goes beyond political and religious denomination. The Common Council of Catholics and Muslims has existed since 1997.[6]

Bialystok prides itself on multiculturalism. Visitors to the northern city will find celebrations of Islam and Tatar culture.

Inspired by the stories and warmth of the Tatars in Kruszyniany, the evening took us to another part of Bialystok. The Tatars of Bohoniki welcomed us like old friends.

A humble mosque in a darkened field created a respite from the cold.

Tatar hospitality is remarkable and the food plenty. Full stomachs prevented us from enjoying the homemade apple cake.

So what did learn from the Tatars of Poland? A remarkable pride and the foundations of their traditions left unshaken by the winds of modernity.

For the younger generation of Tatars, home is elsewhere, in cities like London, Warsaw and New York.

The spirit of tradition, sense of identity and place in Polish history are the lessons we can impart to Muslims in the UK and beyond.

Stereotypes are woven into the fabric of our identity, a means to define ourselves by what we are not. But an open mind opens more doors than it closes. Poland and parts of Britain defy our own perceptions. We just need to open our eyes to these possibilities.